Which Wheats for When?

To determine the appropriate sowing time by variety combination to maximise the grain yield and quality of wheat in different environments in Western Australia.

A series of time-of-sowing trials were located at Mullewa, Merredin (Merredin Dryland Institute), Katanning (Great Southern Agriculture Research Institute) and Gibson (Esperance Downs Research Station, EDRS) in 2018. These trials examined 24 wheat varieties sown at five sowing dates. The varieties ranged from winter types to short maturing commercial varieties and unreleased lines. The sowing dates were similar at all four sites and will be collectively referred to as early-April (ranging from 10-12 April across sites), late April (24-26 April), early May (8-15 May), late May (22-29 May) and mid-June (20-22 June, except Merredin at 9 July).

To ensure that germination occurred shortly after seeding, irrigation was applied. At Mullewa, 20mm of irrigation was applied to that time of sowing block prior to each sowing time. At Merredin, a total of 50mm of water was applied over the whole trial in 10mm allocations (prior to seeding late March, after seeding in April and before seeding in May). Evaporation was an issue with the earlier irrigation treatments. Katanning had 6mm applied prior to and after seeding (total of 12mm) for the early April, early May and late May sowings. The late April sowing only received 6mm of irrigation after seeding due to 15mm of rain occurring prior to seeding on April 22. A “top up” of 3mm was applied to the first three sowing times on May 18 due to evidence of stress. All sowings at EDRS were rainfed.

Trials were sown as six banks of small plots (10 to 12m long x 1.54m wide) with three replicates per time of sowing. All trials were sown into canola stubble (except Merredin, which followed fallow) with fertiliser (treated with Uniform®) banded below the seed (treated with Emerge®). Plots were seeded to target an establishment of 150 plants/m2. Further nitrogen was applied at 4-8 weeks after sowing as Flexi-N® or Urea, and fungicides were applied as required to control powdery mildew and yellow spot/septoria compendium.

Plant establishment counts were conducted at 2-3 weeks after sowing. NDVI measurements were taken every second week from tillering to anthesis. Heading and flowering dates were recorded two or three times per week (Zadok score). Plots from each time of sowing were harvested as soon as practicable (given the wide range of maturities across the varieties) at each site using a small plot harvester, with grain yields recorded and grain samples taken and cleaned for quality testing.

Summer rainfall was average across much of the wheatbelt in 2018, so by mid-April through to May, most of the sites had a drying top soil (Table 1). Mullewa had an average establishment of 98 plants/m2 for the early sowing times and 136 plants/m2 for late May and mid-June.

Establishment at Merredin ranged from 80 to 100 plants/m2 over the five sowing times due to issues with surface crusting that was more prominent with the earlier sowings. The April sowings at Merredin had a staggered germination with a high proportion (estimated) germinating with the irrigation treatment in early May, hence, the results must be treated with caution.

Frosts at Katanning affected grain yields, particularly frost events occurring on August 15 and September 15. The low temperatures resulted in a range of frost damage (measured by floret sterility, FS) which was reflected in the grain yield recorded at Katanning. 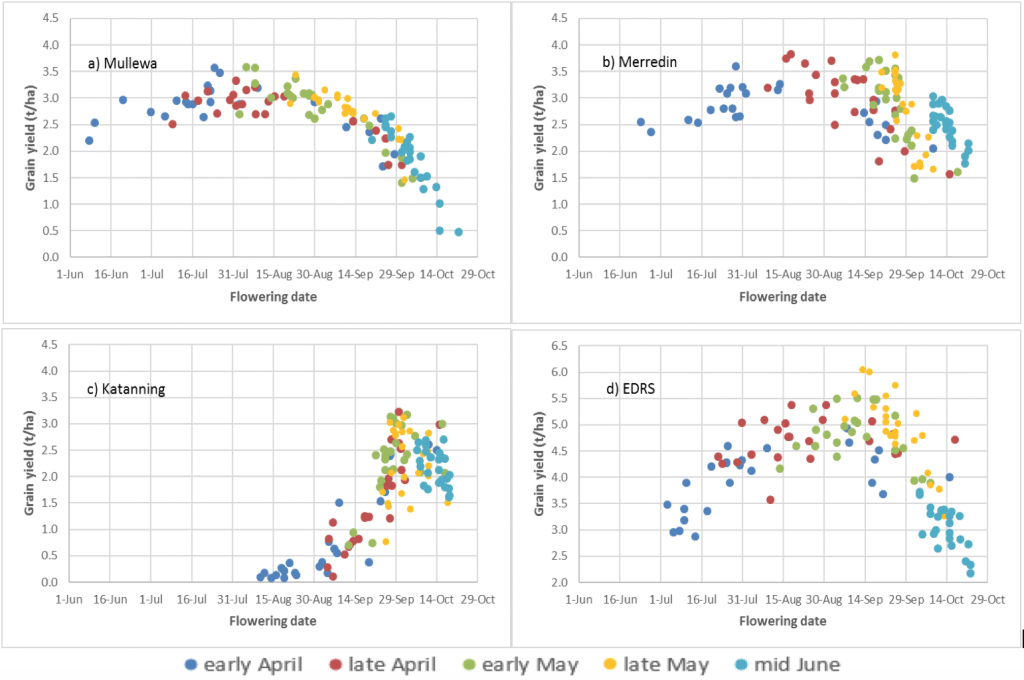 Figure 1. Yield response with flowering date of 24 wheat varieties sown early-April, late April, early May, late May and mid-June at a) Mullewa, b) Merredin, c) Katanning and d) EDRS in 2018.

All sites showed a quadratic trend that grain yields increased from early April to early May sowings before decreasing at later flowering dates (particularly evident in mid-June sown treatments). In 2018, Katanning had a more defined peak in yield than other sites and years (Shackley et al. 2018) which occurred at later flowering dates with later sowing times (Figure 1c). This yield response was attributed to frost damage (grain, flowering, stem/head frost) that occurred on any varieties that had flowered before the severe frosts on the 17th of September.

On the whole, early and late April sowing was not associated with increased yields at Merredin, Katanning and Esperance in 2018. At Katanning, frost was the issue for all varieties examined (floret sterility scores will be available at a later date). While at EDRS, a lack of biomass for main season spring varieties, as well as disease pressure (particularly powdery mildew) limited yields at the first two sowing times. Establishment issues and staggered germination at Merredin may have compromised the yield response for the early April sowing. At Mullewa, on the other hand, early April sowing of mid-long season varieties or late April and early May sowing of short-mid varieties were better able to take advantage of consistent May to August rainfall. Late May and early June sowing times were more affected by dry spring conditions that limited grain filling.

For frost prone environments, the use of the well-adapted mid-long varieties and delayed sowing (May onwards) are vital to maintain high yields and quality. As has been seen at other sites and seasons, in most cases these varieties do not have a major drop-off in yield when sowing is delayed into May, but their later flowering reduces their frost risk compared to short and short-mid maturing varieties.

Previously, short-mid varieties have performed exceptionally well at early sowing dates despite their shorter maturity (Shackley et al. 2016, Shackley et al. 2017 and Shackley et al. 2018). Maturity has had less impact on when a variety should be sown at EDRS than at other locations, likely due to the moderate temperatures of the area and the consistent rainfall (lack of dry spells) across the growing season.

However, in 2018, drier autumn and spring conditions as well as some disease pressure (especially powdery mildew) may have impacted on yields of short maturing varieties sown early. The short-mid varieties had significant yield increases by delaying sowing, particularly from early April to late April and then again in late May, indicating that there can be high opportunity cost with this maturity type sown early. The performance of the mid-long varieties (Cutlass and LRBP Trojan) have been the consistent across seasons at April sowing dates giving growers a greater flexibility in early sowing opportunities and an option to diversify their wheat program that typically consists of >80% short-mid varieties and is geared towards May sowings.

The average grain yields were similar over the April and May sowings with a large yield decline with the June sowing at Mullewa. There was however a significant variety and sowing time interaction with the mid-long maturing varieties (e.g. Cutlass and LRBP Trojan) yielding higher at the early sowing times compared to the mid-short or short maturing which achieved higher yields as sowing was delayed (Figure 2a and Appendix 1a).

The winter/long maturing varieties (e.g. Forrest and Longsword) were not competitive with the mid-long or even short-mid varieties when sown in early April. The winter wheats flowered at the end of September compared to late July for LRBP Trojan and Kinsei. This flowering was later than previous seasons where the winter/long wheats were more competitive. Overall the mid-long and mid varieties (e.g Cutlass and Scepter) had no significant yield increase or decrease for the three early sowing times. This result is similar to Dandaragan in 2015 and Mullewa in 2016 (Shackley et al. 2016, Shackley et al. 2017), but not in 2017 which had a cool and wet finish to the season.

The mid-short varieties Mace, Devil, LRBP Havoc and the short varieties, Vixen and Emu Rock all yielded significantly higher at the early May sowing than the April sowings. Switching from mid-long variety sown in April to a short-mid in May at Mullewa in 2018 led to similar yields achieved even as sowing was delayed.

The mid-short varieties instead showed a large yield penalty with the early April sowing. In 2018, well adapted, main season spring varieties like Scepter and Devil were the highest yielding, provided they were not sown early April. However, the mid-long season varieties do have a greater flexibility for early planting opportunities compared to mid-short season varieties which have a high frost/disease risk if you sow them early.

Grain quality analysis are still to be completed for all sites at the time of writing. As a result, delivery grade and economic analysis was not able to be completed. Preliminary grain quality results from EDRS have shown stained grain (blackpoint) to be an issue at the April sowing, while frost distorted grains were at high levels at Katanning.

Sowing wheat at the right time is one of the most important means of maximising grain yield and it should be noted that the highest grain yields were not associated with the earliest sowing date at all sites. There is an opportunity cost of sowing short-mid season varieties in April. Although variation occurs across environments and seasons, maturity effect on yield performance was evident and the results highlight that just as long maturing varieties should not be sown in late May, short-mid maturing through to short maturing varieties are typically not suited to be sown in April or early May (except northern environments). Mid-long maturing varieties sown from late April onwards, and short-mid maturing varieties sown in May typically result in the highest yields at most sites. In frost prone sites, however, delaying sowing of even mid-long maturing types into May results in increased yields.

The research continues to highlight the need for a variety which is better suited for early April sowing opportunities in WA. While winter types have an extended growing period when sown in early April, maximum yields are almost always achieved by mid long varieties sown in early May or mid-short types sown in mid to late May. The role of winter/long and mid-long maturing wheat varieties are currently undervalued in the WA cropping system.

The research undertaken as part of this project is made possible by the significant contributions of growers through both trial cooperation and GRDC investment. The authors would like to thank them for their continued support. This research is also co-funded by DPIRD. Sincere thanks to the Critch family for the provision of land at Mullewa, to the Geraldton, Merredin, Katanning and Esperance RSUs for the management of trials and for the technical support of Melanie Kupsch, Bruce Haig, Ashleigh Donnison, Rod Bowey and Helen Cooper.

Appendix 1: Grain yield (t/ha) response of wheat varieties to sowing time at a) Mullewa, b) Merredin, c) Katanning and d) EDRS in 2018. Varieties arranged from left to right in order of average maturity at that site. Severe frost damage occurred at Katanning and establishment issues caused staggered germination for April sowings at Merredin.