1. An increase in producers in the HRFCZ of WA successfully sowing summer crops in rotation with winter crops.

Around 864 000 ha in the HRCZ is sown to annual grain crops each year, with the potential to increase to 1 118 000 ha (Zhang et. al. 2006). Land capability studies from 2007 (Van Gool et. al. 2007) show about 25% of land in the zone has low capability for cropping due to waterlogging, salinity, low water storage and shallow rooting depth (thus low PAWC), low nutrient- holding capacity, and subsoils that are currently acidic or at risk of becoming acidic.

The introduction of summer crops into the mixed farming system will potentially increase grain yields by a conservative estimate of 5%, and increase area of production by 10%, equating to a total increase in tonnage grown to winter crops (cereals in this case) of 453 600 tonnes (estimate of 3.5 t/ha). Total dollar value increase to producers in the HRCZ of WA if including summer crops into their system could potentially be $113 400 000.

Approximately 80% of atmospheric losses (as nitrous oxide) occur over spring and summer following a series of summer rainfall events (GRDC project code: QUT00003). With a similar project, the HRCZ of Victoria measured nitrous oxide emissions as high as 35 kg N/ha despite mitigation; a cost of $17 500 over a typical 2000ha farm at current urea prices. Financial losses in the HRCZ of WA may be similar due to high rainfall and warm summers with summer rainfall events. The inclusion of summer crops in the HRFCZ of WA could potentially utilise N in crop growth, thus reducing greenhouse emissions.

As with all mixed farming systems in the cropping zones in Western Australia, costs in the high rainfall cropping zone are a major adoption barrier. In 2005, an analysis of crop protection and fertiliser inputs for a target cereal yield of 4.5 t/ha was over $400/ha; understandably larger in 2017 (Hill et. al. 2005). Summer cropping is an inexpensive crop, which may offer an alternative control option for weed, disease and fertiliser (if planting legumes and/or incorporating as a green manure) management. As such, not only herbicide and disease control inputs (and potentially fertiliser) for the following crop may be reduced, summer crop competition may provide an alternative control of resistant ryegrass (or other weed grasses). In this circumstance, the dollar value of reduced costs due to summer cropping is hard to determine, but a conservative estimate of $10/ha reduction in costs over potential cropping area would save producers in the HRFCZ of WA $9 504 000.

The Darkan site is located on Hillman Road approximately 20 m North East of Darkan on Clinton Harrington’s property. Clinton was mainly interested in looking at how summer crops would perform in Darkan over the summer months, and if they could provide him with an option to graze his sheep on the green feed over yield interests. 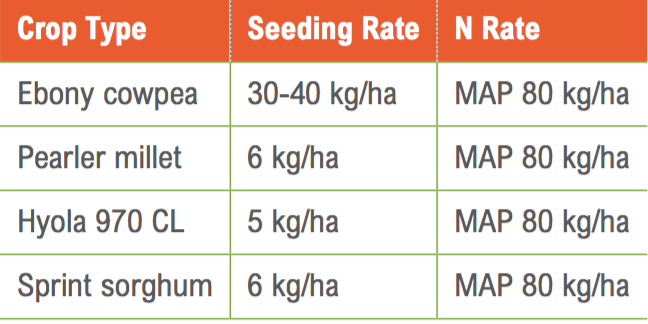 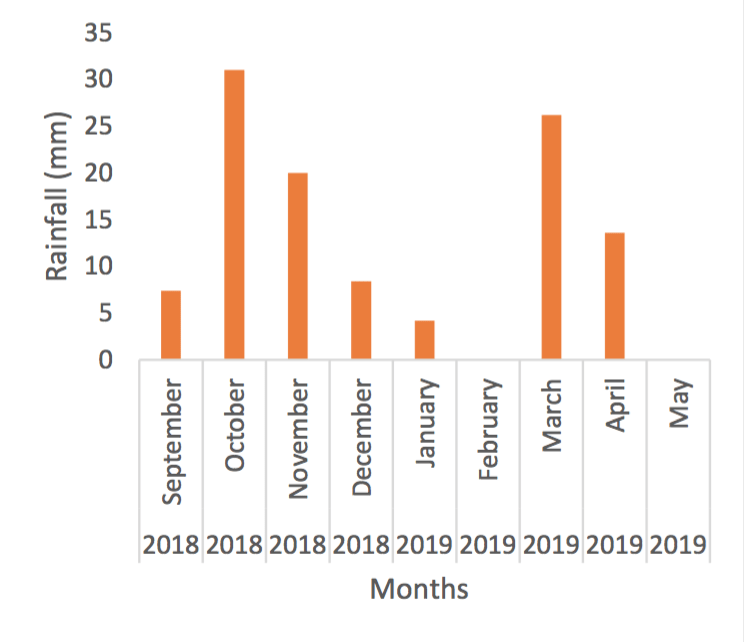 Figure 1. Rainfall summary (mm) at the Darkan site between September 2018 until April 2019.

NDVI Assessments were collected from the trial on the 2nd November 2018 and the 5th February 2019.The Green seeker was held approximately 1 m above the crop, run from left to right across the plot rows. This was repeated three times in each plot over a 10 m distance.

The Broomehill site is located on the South corner of Bachelor Road and Tieline Road, Broomehill. This site was hosted by Scott Newby, with an interest in growing summer crops again, predominately to produce green feed over summer for his sheep.

The trial was sown the the 10th November 2018, with the soil temperature of over 18 degrees after 10 mm of rainfall between the 1st to the 10th November. The site was knocked down with 2 L/ha of paraquat on the 9th November 2018. The crops were sown with 70 kg/ha of MAP down the tube at seeding (Table 2). The trial was 12 m wide by 150 m long, with five crop types included in the trial.

Table 2. Crop types, with seeding and nitrogen rates applied at time of seeding at Broomehill site 2018. 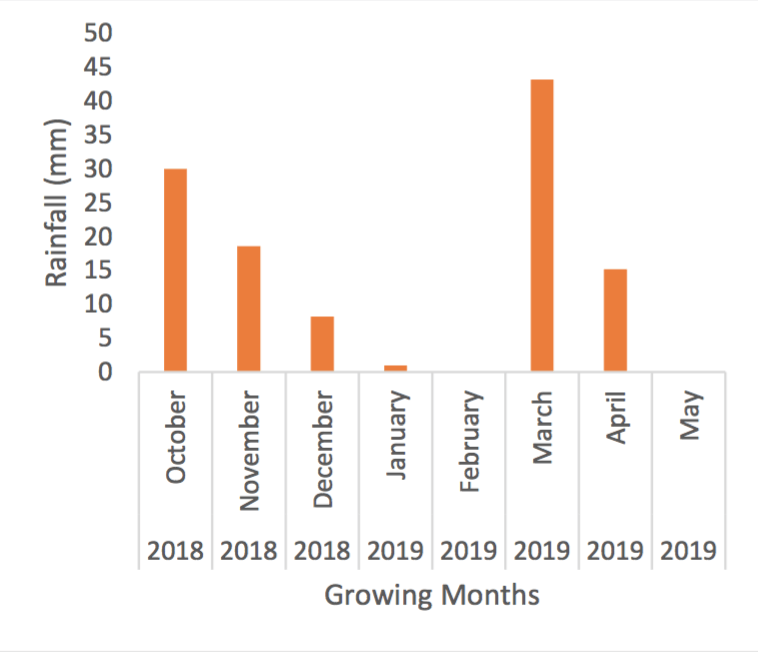 Figure 2. Rainfall summary (mm) at the Broomehill site between October 2018 until April 2019.

Plant establishment counts were collected on the 15th December 2018 with four counts per 1 m taken at 20 m intervals over three locations along the plots, with a total of 12 counts in each plot.

NDVI Assessments were collected from the trial on 15th December 2018. The Green seeker was held approximately 1 m above the crop and run from left to right across the plot rows. This was repeated three times in each plot over a 10 m distance.

At the Darkan site in the first seven days the cowpea and canola germinated with multiple plants observed. While the germination was patchy, plants were coming up across the site. It took the C4 grasses 2 weeks to start germinating, this was likely due to the soil temperature as it was at the minimum of 16 degrees when sown. 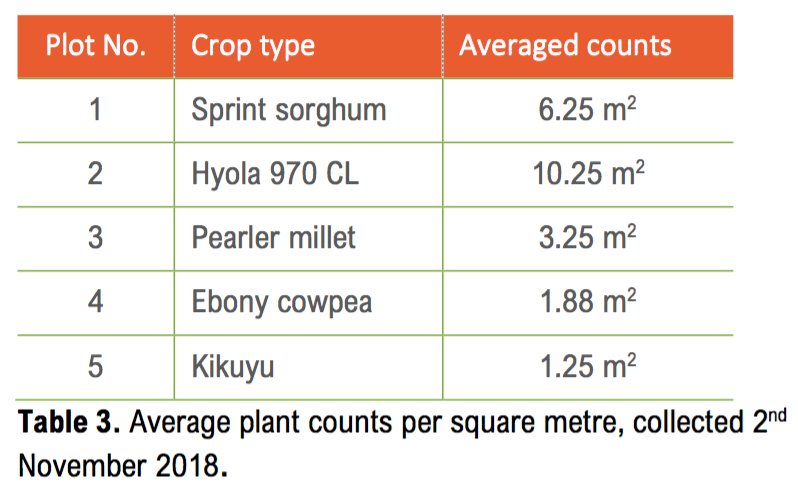 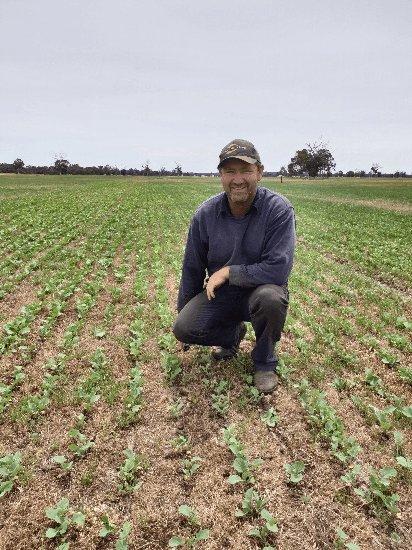 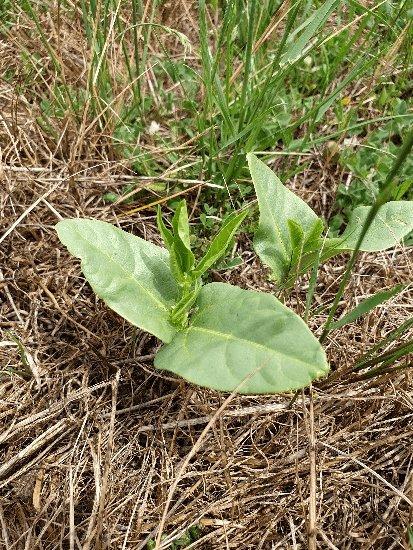 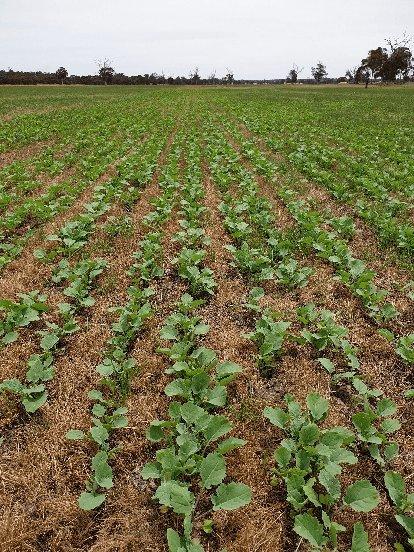 Figure 3. Photographs taken on the 2nd November 2018 with the grower Clinton Harrington, and the growth stages of the ebony cowpeas and hyola 971 CL canola at the Darkan site. 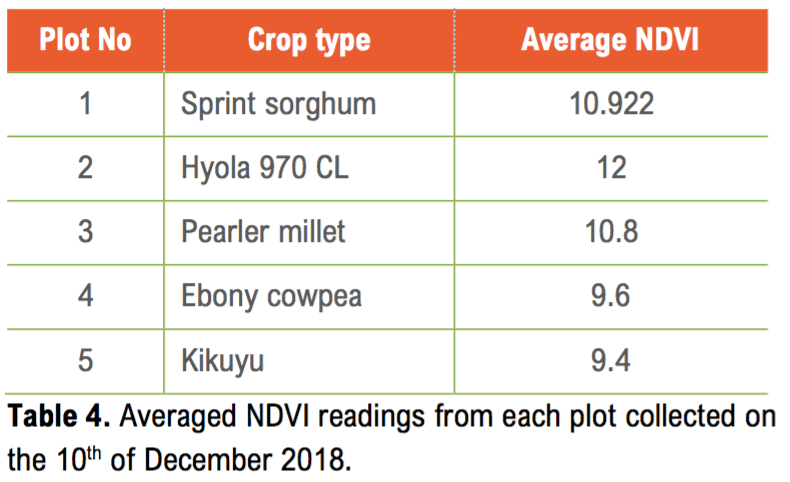 There was no difference seen between the NDVI reading taken on the 10/12/2018.

In December 2018, there was less than 8 mm of rain in Darkan and less than 5 mm total in January and February of 2019. A site visit was scheduled on the 5th February 2019 to meet with the host and a few growers from Darkan to look at the trial and have a discussion regarding summer cropping and the fit for their enterprises.

The site was lacking moisture and the soil was dry as far down 30 cm or more. The site desperately needed moisture. Speaking with the grower early January 2019, he came to look at the trial and observed insect damage. Clinton came out the next day to spray, however the cowpeas were demolished with the trial having the only green feed around it, creating a green island. Clinton noted that they hammered the cowpeas but left mostly everything else untouched. The canola had died off with brown dry plants still visible. However, the C4 grasses, the millet and sorghum persisted, some had died off and the plants were desperately needing water, yet this was a positive sign for the grower Clinton. 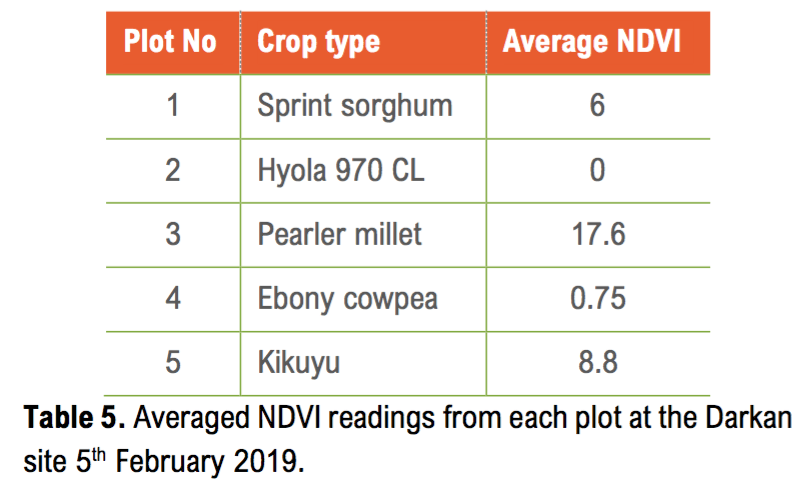 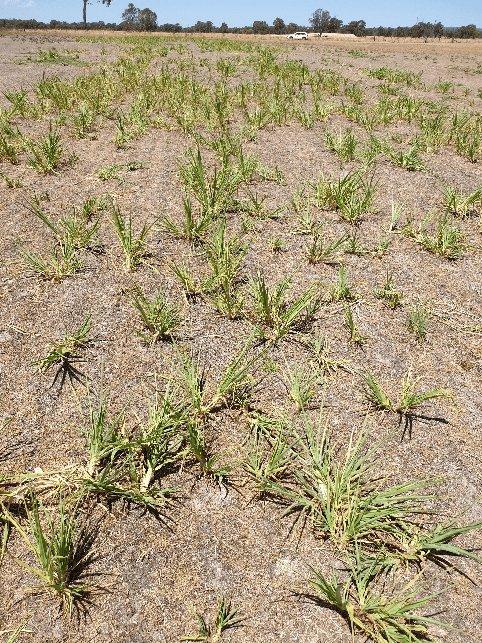 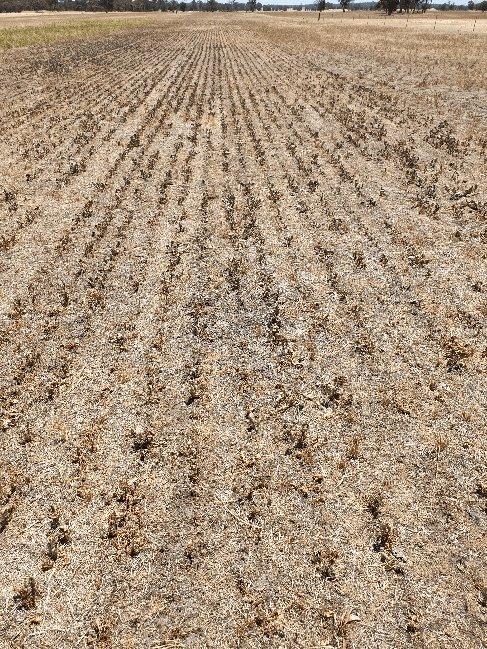 Figure 4a. Photographs taken on the 5th February 2019, showing the pearler millet persisting despite rainfall.

Figure 4b. Photographs taken on the 5th February 2019, showing the canola and most of the sorghum had died leaving brown and brittle remnants.

A site visit on the 19th March 2019 found that patchy millet had persisted and there was green feed available. There was sorghum still green, though was struggling from the lack of rainfall despite having 10 mm of rainfall between the 7th and the 15th March 2019. The occasional canola, cowpea and kikuyu plants were seen, though sporadic. 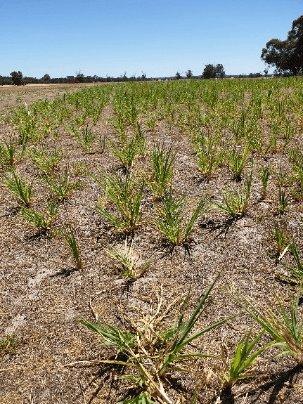 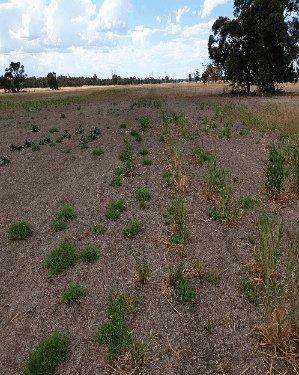 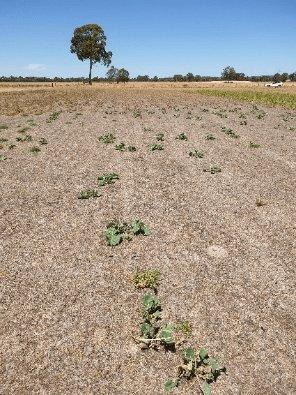 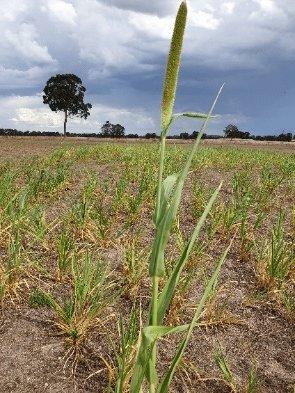 Figure 5. Photographs One and Three show the pearler millet growing reasonably well despite the lack of rainfall. Photograph Two shows the odd hyola 970 CL plant. Photograph Four shows the sorghum and canola treatments with some kikuyu coming through.

Darkan have had 35 mm of Rainfall between the 15th March until 10th May, not enough for the summer crop to thrive and provide benefits to the grower. Clinton Harrington mentioned that despite poor summer rainfall he would be interested in looking at the millet to sown with kikuyu in the future to provide some green feed over the summer for his sheep.

The trial was sown on the 10th November 2018. In October Broomehill had 35 mm of rain, and after 10 mm of rain a few days prior to sowing the trial. The trial at Broomehill struggled to germinate, it was extremely patchy and there were not enough plants to perform an accurate representation of the plants in the trial. We were unable to perform NDVI readings as the plants were to sporadic to gain any meaningful results.

Table 6. Averaged plant counts per square metre at the Broomehill site on the 11th December 2018.

The seasonal condition in Broomehill was poor and low rainfall caused the trial to suffer and die off very quickly, the site had 9 mm of rainfall between December 2018 and the start of March 2019.

On the 27th February 2019, we went to visit the site with grower Scott Newby. Similarities were seen between the Darkan and Broomehill sites, whereby the pearler millet was still visible in small patches, however there was no canola, sorghum, or cowpeas seen at this site. There was the occasional sunflower still surviving across the site, though very little biomass observed.

The grower had also put some of his other paddocks into summer crops, again they also struggled with germination and recruitment from lack of moisture. The soil profile in February was very dry, down to at least 30 cm, with very little moisture found only in certain parts of the paddock. 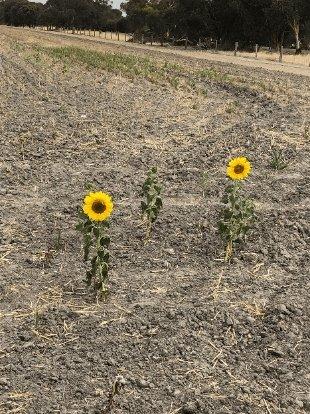 Pearler Millet looks to be an option to provide green feed to growers over the summer months as it appeared to develop biomass despite a dry 2018/19 summer.

According to our producer rainfall records, since 2003, four out of five years have had summer rainfall events in January and February, however 2017/18 summers have had minimal rainfall over the summer months. These conditions are not ideal for producing a summer crop.

Summer crops are an opportunistic crop and if there is moisture in the soil after a good rainfall event from October to December, it may be beneficial to grow a summer crop, allowing the crop to develop some biomass to provide green feed over the summer months. The cost of putting the crop in should be weighed up against the risk of little to nil rainfall over the summer months.